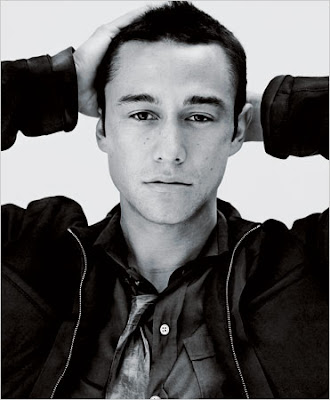 There's something a little bit filthy about fancying Joseph Gordon-Levitt that stems from having watched him grow up on 3rd Rock From the Sun.

It's been 8 years since he played that role as a long-haired smart-mouthed teenager but I still think of him as a little kid, despite the fact he's popped up in a handful of alternately cute and rather good indie movies since, such as the underrated school noir movie Brick and 2004's Mysterious Skin. (And yes for the purpose of this argument I am overlooking the fact he plays the Cobra Commander in the film GI Joe: The Rise of the Cobra. Oh dear). He's also got some pretty impressive genes, based on the fact that he does not appear to have aged a single day in the past five years. Seriously, where is this dude sleeping - in a freaking cryogenics chamber?

All of which probably goes to explain why it feels a bit wrong to find myself a) oggling him in his latest movie, the cute-but-flawed 500 Days of Summer, and b)tapping him as my latest token smokin' hottie. Nevertheless, I could not resist because here's the shocking thing about Joseph Gordon-Levitt: he's a bloody year older than me.

Far from being a cute little scrap of jail bait, JGL is practically An Older Man. Forget thinking about him as your best friends cute little brother who you secretly fancy like mad even though you pretend to agree with your friend that he's really annoying. No, JGL is more like your older brother's best friend, who you have fancied for years and for whose benefit you pretend to be acquainted with a vast variety of bands and books you have never heard of, let along heard/read.

I feel I've diverged from my point ever so slightly but I think you get where I'm coming from: he's talented, he's cute and he's definitely legal.
Posted by my name is kate at 1:09 PM

Is it just me, or does he look a lot like Heath Ledger in this picture.

I've never seen the resemblance before but you're totally right.