"Hammond, after some consideration, I've decided not to endorse your park"

I have long nursed a serious lady boner (sorry) for the original Jurassic Park franchise. I loved the original book/movie, ditto the follow-up, The Lost World, and the third movie... well, like the rest of the world I signed off on an agreement to pretend that shit sandwich never existed so let's not dwell.

The original movie in particular is - to me - is a genuine action classic and barely a month goes by without me quoting the line: "Clever girl".... usually at Andy for being almost as clever as a Velociraptor (but probably not quite). It's also a movie that has given me recurring nightmares, including one in which I try to escape the T-Rex by - for reasons unknown - zipping myself inside one of the cushions of my old family couch. Yeeeeeeah. I probably wouldn't survive long in the wild.

Anyways, all of this is a long-winded way of saying that I am 100 per cent excited by the prospect of the latest installment, Jurassic World, even if it's still a good 8 months away. Chris Pratt? Check. Cheap scares? Check. Life finding a way? Double check. At this point I am so so so over superhero movies (my beloved X-Men not withstanding) that I'm especially thrilled by the possibility of a spectacle-type movie that doesn't involve spandex or - God help us - another fucking origin story.
Posted by my name is kate at 1:49 PM No comments: 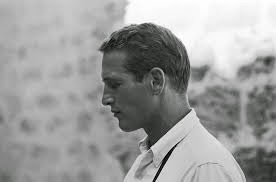 I'm not crying. I've just been... cutting onions. But you should probably follow that link and watch the video so long as you're not, I don't know, in a public place or at work where people will think you're a blubbering weirdo.
Posted by my name is kate at 9:54 AM No comments: 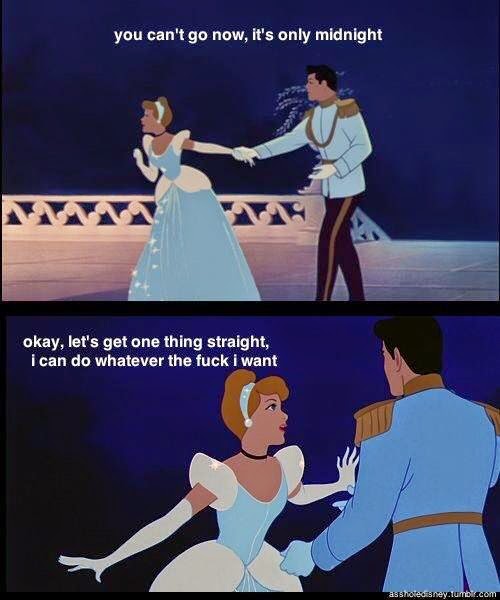 Food for thought.
Posted by my name is kate at 9:49 AM No comments:

Bar conversations that suggest I may need to get out more.

Her: Is this Shake it Off?

Me: Um, I'm pretty sure I recognise it from my Body Pump class.
Posted by my name is kate at 8:07 AM 1 comment: 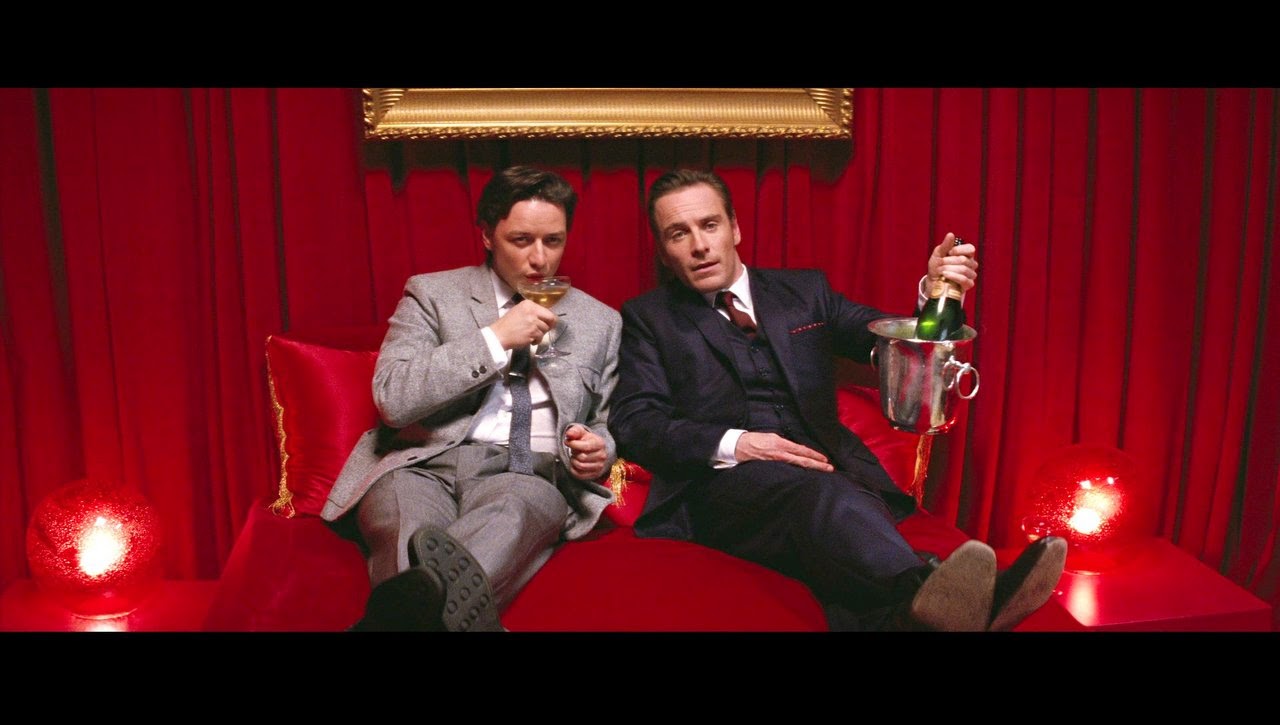 ... the evidence is stacking up. First, someone took my all-time favourite superhero franchise and decided to cast super hotties Michael Fassbender and James McEvoy in the reboot of the films. Amazing.

Now they've decided too much of something is, you know, wonderful, and have cast one of my many new movie boyfriends, Oscar Isaac, in the next instalment. Sure, he's supposedly a villain but surely it's not too much to ask that at some point Professor X and Magneto have to team up to take him down in some kind of... hot tub scenario. I mean, that could happen. Sans towels.

Anyway, really I just wanted to say thanks Jebus: I knew that if you did exist you'd be a big homo and into exactly the same kind of dudes as me.
Posted by my name is kate at 8:05 AM No comments:

Scenes from a delightful weekend away: 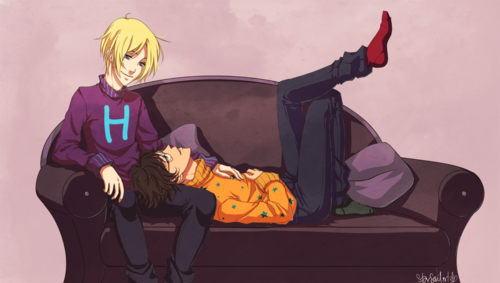 Explaining slash fiction to a colleague with the words: "So if, like, you thought Harry and Draco should have hooked up..."

(Artwork via fanpop)
Posted by my name is kate at 8:54 AM No comments:

Maybe all men should just wear eyeliner... forever. (Via gothiccharm school)
Posted by my name is kate at 8:50 AM No comments:

No jokes, just a recommendation

Fair to say it's pretty hard for most of us to imagine what it would feel like to be trapped inside the wrong body. Harder still to imagine how you process all that if you're a little kid, not to mention if you're the parent of that little kid. It's the morning after I watched last night's episode of Four Corners, featuring transgender kids, and I can't stop thinking about it. That's the power of great and important journalism: when it can make you feel simultaneously sad and happy, powerless and fired up. If you missed it, catch up on iView - it's the best episode I've seen all year.

N.B: On a related note, this article popped up on my Facebook feed today offering an adult perspective on similar issues. I tend to think of myself as an open-minded person (don't we all) and it got me thinking about my tendency to want to put labels on things so, um, yeah. There you go.
Posted by my name is kate at 7:54 AM No comments:

If you had a burning desire to see my boyfriend Benedict Cumberbatch do some celebrity impressions and generally be delightful... 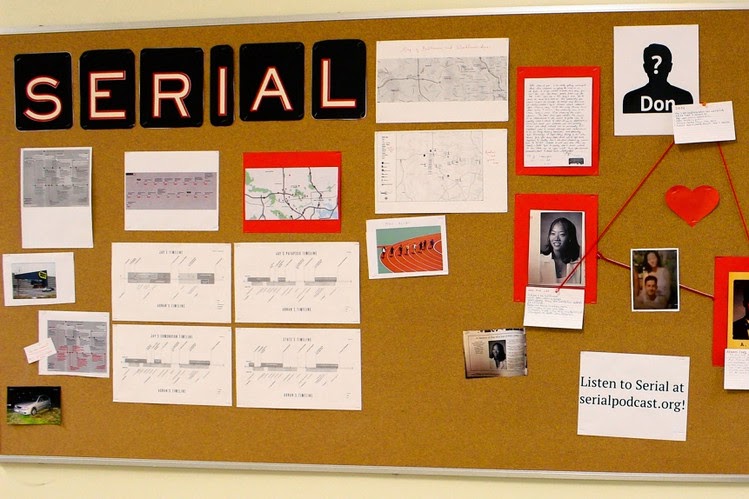 You may have heard me crap on about my latest addiction: The Serial podcast.

I'm sorry about this, I know I've been shoving it down the throats of friends and family lately.

But also, totally not sorry because it's awesome and I'm doing you a big fat favour by recommending it and giving you the opportunity catch up with a binge listen. It's not exaggerating to say I give a little wheeee of glee every week when the next episode comes out. I have strict rules about where and how I'll listen to it: I have to be able to listen to it all in one go, I try to avoid the possibility of any distractions. I want so much to keep clear in my head all the different characters so, you know, I can get into some wild speculation.

If you're not convinced by my insistence Serial is great and worthy of your time, perhaps you'll listen to The Wall Street Journal? I mean, those guys are smart. They understand numbers and everything. They could probably do your taxes if they wanted.
Posted by my name is kate at 10:02 AM No comments: 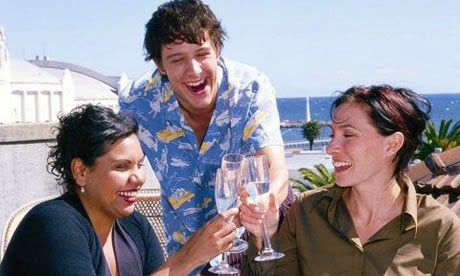 As a teenager I had a big ol' crush on Samuel Johnson, who then played a starring role in not just my fantasies but the popular and really rather good TV show The Secret Life of Us. It helped that he bore (I felt) a passing resemblance to the real life object of yet another (somewhat unrequited) crush: the spritely young chap who would eventually become my husband. (Sidenote: I recently found an old diary which actually drew parallels between my crush on Andy and Samuel's character's crush on Claudia Karvan so... yeah. I was so young and so delusional back them. Also seems like I had kind of a lot of spare time on my hands).

Anyway, I grew out of my Samuel Johnson crush but had I known then what I know now, I suspect I would never have given it up and may have developed into a borderline stalker of the poor bastard because maaaaan he's done a really awfully nice piece of writing for the Saturday Paper this week. You can and you should read it here. If you need me I'll be on the couch mainlining The Secret Life of Us.
Posted by my name is kate at 8:18 AM No comments:

"...your double eyelid from birth bothers me..."

I think I might love this a little bit.
Posted by my name is kate at 12:10 PM No comments:

Look on my works, ye Mighty, and despair

"I feel like a Geography teacher going "hey guys, I don't care what's cool, and really, doesn't that make e coolest of all?" No. No it doesn't, and no I won't call you Gary."

Read the rest of the charming article from which this snippet springs here.
Posted by my name is kate at 4:39 PM No comments: 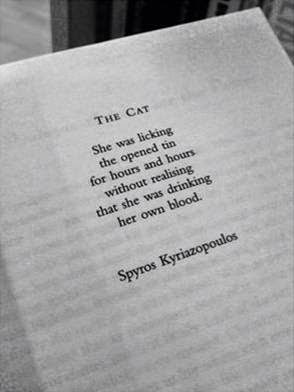 Thanks (I think?) to Facebook pal Darren Wong for this one. Also: yikes.
Posted by my name is kate at 1:14 PM No comments:

Emotionally mature things I did today #12

Resisted the urge to send my annoying neighbour a shitty, passive-aggressive email that would have been deeply satisfying but would also, in Andy's words, Only Encourage Her. Deep breath, deep breath. This too shall pass.
Posted by my name is kate at 5:25 PM 1 comment:

"It was never generally available but it was the Velvet Underground of computers, in that everyone who saw it went on to make their own computer industry." 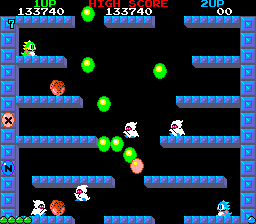 I don't know a lot about computers but I did own an Amiga 500 back in the day - or, rather, my family did - and I used it a lot. For those who didn't have the pleasure, let me assure you it was GLORIOUS: 20 years on I have nothing but good memories of playing Bubble Bobble, Great Giana Sisters and creating some truly atrocious calendars and birthday cards as gifts for kind family members who were classy about it on the outside but presumably dying of laughter on the inside. That isn't a slam on my calendar-making abilities or anything but, you know, they were printed on a dot matrix printer, so... yeah. There was THAT.

Do you need to have owned an Amiga or a Commodore 64 or have been exposed to a computer in those charming, heady days of the 80s to truly appreciate and warm to this lovely article about nostalgia, friendship and, er, grief and to appreciate paragraphs like this one -?


In 2002, Jim and Tom and I got together and went down to an Amiga festival at a hotel in Maryland. It was—even by the standards of nerd events—well, it was rough. Men had Amiga logos woven into their beards. People with ailments sold disks out of worn cardboard boxes. I had expected it to be like an alumni weekend, a chance to get together and chat about old times. But these people were angry. I remember driving back and feeling stupefied. How could all that sweetness have leached from the world? I blamed Microsoft Windows.

Maybe not but it sure worked for me. It's a long read and a LOT of it went screaming over my head but give it a shot.
Posted by my name is kate at 3:47 PM No comments:

Pros and Cons about the movie The Immigrant 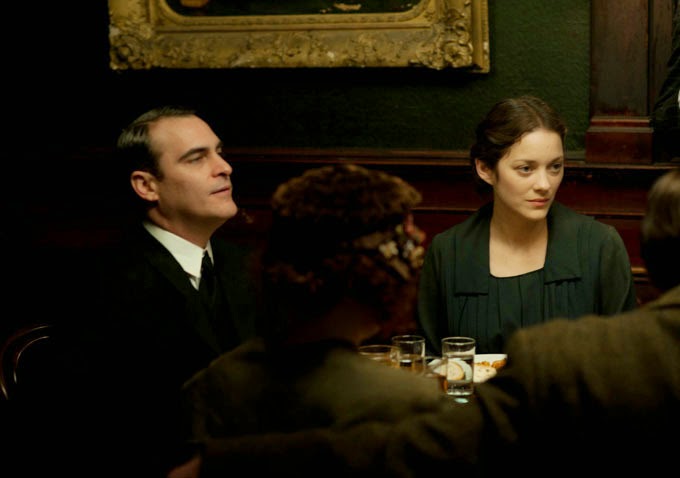 Pro: It's not that long: under 2 hours and Lord knows I love a short movie.

Pro: The acting is great. Marion Cotillard and Joaquin Phoenix are kind of terrific in their way. Jeremy Renner is... entirely bearable.

Con: After a promising start and the introduction of some fascinating characters the movie quickly becomes... kind of boring.

Cons: ... And predictable. And it takes itself too seriously.

Pro: There is still probably a great original movie waiting to be made about the American Dream in the context of the flood of immigrants in the 1920s. 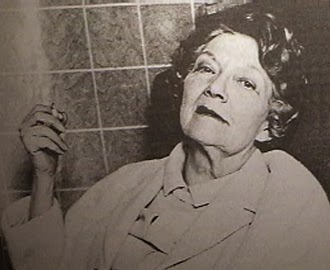 “You can pretend for a long time, but one day it all falls away and you are alone.” (Jean Rhys)