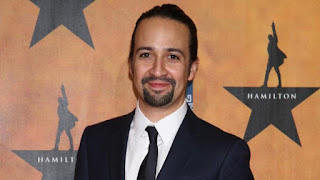 My feelings about Lin-Manuel Miranda are complex. By which I mean I can’t entirely decide if I want to do terrible things to him or just be his best friend and hang out, maybe write some songs together*.

Physically he ticks some boxes, particularly with his delightful smile. That’s a non-negotiable for me: I’m pretty sure I have never fancied someone who didn’t have a great smile. He also has dark hair, great skin and generally seems chill-as-hell and charming, all of which I care for greatly. At the same time his head does… sort of resemble a potato and when he wears his hair out it... doesn't really work for me.  At all. Also, I’m not trying to be cruel here, but he does have a borderline Dawsonesque fivehead and the less said about his facial hair the better.

If I wasn’t so weak at the knees for Hamilton and I passed him in the street would I fancy him? I’m really not sure.

For me it comes down to this hypothetical scenario: LMM and I are hanging out in a bar. We’re having a great time as he tells me stories about writing an incredibly successful Broadway musical and I show him pictures of my cat. It’s a real meeting of minds. At the end of the night we agree to catch up to see a movie soon and…

Here’s the thing. If I don’t fancy him and this is just an I-admire-you-greatly sort of a thing then I’m happy to go home to my own bed. If I do fancy him I’ll be deeply unhappy if he doesn’t manage to stick his tongue down my throat before we part ways. This is science, people, this is a scientific process right here.

Verdict? I'm disappointed to be heading home solo, which I'm pretty sure means I do in fact fancy him. So that’s nice to know. Aren't you glad we took this journey together?

*By which I mean he writes songs while I sit quietly.
Posted by my name is kate at 9:38 AM