"I didn't tell you to put the balm on" 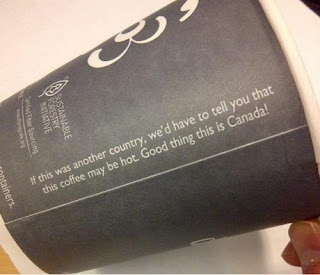 As someone who has definitely sniffed a bit about the famous hot coffee case (and snorted at the Seinfeld parody) I found this bit of background, via Rainbow Rowell, eye-opening and appropriately guilt-inducing.


A few things you need to know about this hot coffee case:

MORE FUN FACTS:
9. The woman who was burned was not driving the car, she was a passenger.
10. The car was not in motion when she was burned. The car was parked so she could add cream and sugar.
The coffee case is one of the biggest examples of a carefully-crafted smear campaign by a company that is in the wrong trying to hide that.

Additionally, several people had been badly burned by McDonald’s coffee prior to that case, both employees and customers, and McDonald’s had been fined and told to lower the heat of their coffee. They refused to lower the coffee’s heat, continuing to serve a product they KNEW from EXPERIENCE was dangerous, because they could.
When she was burned, she reached out to McDonald’s for them to cover her medical expenses. They sent her a coupon booklet as a big eff yuu.
She required skin grafts not just on her genitals but on her thighs, buttocks, and I think stomach. Like, it was a lot of skin grafts! And did you know that skin grafts don’t always take? She was very severely hurt by a product that McDonald’s knew for a FACT was dangerous.
But nah, go on talking about how she was just foolish and greedy, that’s obviously the case, big corporations have all of our best interest in heart, really they do.

Liebeck, who also underwent debridement treatments, sought to settle her claim for $20,000, but McDonalds refused.

At that point, she had medical bills of over $11,000. She was anticipating more. She didn’t have much money.She just wanted McDonald’s to pay for the damage their coffee had done so that she could get medical treatment. Seems reasonable, right?

McDonald’s countered with an offer of $800, then turned down repeated requests to settle.

And there weren’t several people who were burned before Liebeck. It was a LOT worse than that.

During discovery, McDonalds produced documents showing more than 700 claims by people burned by its coffee between 1982 and 1992. Some claims involved third-degree burns substantially similar to Liebeck[’]s. This history documented McDonalds’ knowledge about the extent and nature of this hazard.

So McDonald’s knew that their coffee was burning people–in some cases, causing third-degree burns. They knew it for TEN YEARS. And they did nothing about it.
Oh, and the jury award?

The jury awarded Liebeck $200,000 in compensatory damages. This amount was reduced to $160,000 because the jury found Liebeck 20 percent at fault in the spill. The jury also awarded Liebeck $2.7 million in punitive damages, which equals about two days of McDonalds’ coffee sales.
:::
The trial court subsequently reduced the punitive award to $480,000 – or three times compensatory damages – even though the judge called McDonalds’ conduct reckless, callous and willful.

So all of the jokes about how rich Liebeck got off the settlement? Nope. McDonald’s ended up not even having to pay most of it.

Nancy Tiano says her mother was “never happy about the incident” and that “the burns and court proceedings took their toll.” During her final years, Tiano says, her mother had no quality of life. The good news is that the settlement helped to ease the end of her life by paying for a live-in nurse.

That’s where the money went. For medical care.

Don’t forget that the REASON that they serve their coffee at DANGEROUSLY high temperatures (Injuring literally thousands of customers) is because coffee brewed and kept at those DANGEROUSLY HIGH temperatures tastes fresher longer, so less undrunk coffee has to be thrown out throughout the day, so McDonalds can MAKE MORE PROFIT on their damn coffee sales.

Anybody else needs a FREE MC DONALD'S GIFTCARD?