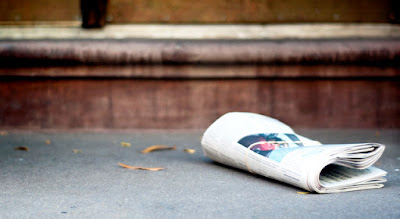 I'm officially on holidays for a week from today, which means I have time to actually read a lot more journalism, particularly long-form, than I usually do when I'm paging through papers or scrolling through websites for just long enough to be sure I have a vague idea of what's going on everywhere without letting anything sink too far into my brain.

My break is getting off to a great start because so far I've read two terrific reads on two subjects I didn't think I cared about: Roger Federer and, um, I guess... America?

Brian Phillips doesn't mention the debt he owes to David Foster Wallace in his own version for Grantland but to me it's hard to avoid comparisons between Phillips' very good read and DFW'a wonderfully titled and by-now classic essay "Roger Federer as Religious Experience". I don't know though, maybe it's just because I don't read a lot about Federer and there's no comparison to be made.

Either way Phillips has some gorgeous prose and it's well worth reading the whole thing. If this opening doesn't hook you in it's probably not for you:


"Early on in Adam Roberts’s 2014 meta-sci-fi submarine-disaster novel, Twenty Trillion Leagues Under the Sea, a French nuclear sub called the Plongeur begins to sink in the North Atlantic. The startled crew tries to regain command of the vessel, but nothing works. The controls don’t respond. The diver who’s sent out to reconnoiter the exterior of the ship with a flashlight doesn’t come back. The Plongeur is built to withstand pressure to a depth of a thousand meters or so. Beyond that, it will be crushed. And even if it isn’t, even if it somehow holds together against what Roberts calls “the unspeakable pressures of the profound deep,” it will build up so much speed as it falls that it will shatter when it hits the ocean floor."

Then there's Gary Younge's "Farewell to America" for The Guardian. This one shocked me because I wasn't sure there was anything new to read on this topic. Whether Younge's saying something new or saying something old, just beautifully, I'm not sure. It's a tremendous piece of writing though - get into it:


For the past couple of years the summers, like hurricanes, have had names. Not single names like Katrina or Floyd – but full names like Trayvon Martin or Michael Brown. Like hurricanes, their arrival was both predictable and predicted, and yet somehow, when they landed, the effect was still shocking.
We do not yet know the name that will be attached to this particular season. He is still out there, playing Call of Duty, finding a way to feed his family or working to pay off his student loans. He (and it probably will be a he) has no idea that his days are numbered; and we have no idea what the number of those days will be.