Do you expect me, to let you go? 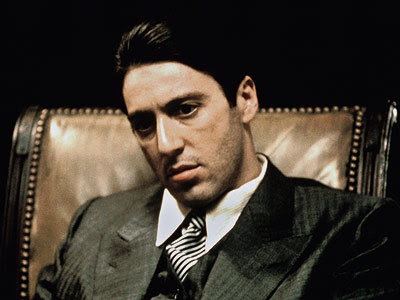 I have been doing a shameless amount of random net perusing this week, procrastinating as ever. This bad habit hasn't got any more writing done but it has thrown up a few beautiful websites I could never have dreamed of. I'd like to introduce you all to World Net Daily and particularly to occasional columnist Jill Stanek.

Apparently Jill is quite well known in certain circles, though I'd never heard of her, so perhaps it's best if I let her words speak for herself and quote from a lovely piece she wrote this year, thoughtfully titled "Italian Abortion Mafia". Let's read on.

"One of the best scenes in the Godfather movie trilogy was in Godfather II, when Kay Corleone (Diane Keaton) told her husband Michael (Al Pacino) she was taking their two children and leaving him. The dialogue:

Michael: Kay, what do you want from me? Do you expect me to let you go? Do you expect me to let you take my children from me? Don't you know me? Don't you know that's an impossibility, that that could never happen, that I'd use all my power to keep something like that from ever happening? Don't you know that? Kay, now in time you'll feel differently. You'll be glad I stopped you now. I know that. I know you blame me for losing the baby. Yes. I know what that meant to you. I'll make it up to you, Kay. I swear I'll make it up to you. I'll … I'm gonna change. I'll change. I've learned that I have the strength to change. And you'll forget about this miscarriage, and we'll have another child, and we'll go on, you and I, we'll go on."

God that is a great scene isn't it? Film critic Antonia Quirke has a lovely take on that line in her wonderful book, Madame Depardieu and the Beautiful Strangers when she describes Pacino's voice as an oboe ("do you expect me, to let you go?"). I really do love that scene. Gosh Jill and I have so much in common. I can tell we're going to be BFF's. More, please...

Michael: You won't take my family!

Michael: You won't take my family!

That spontaneous slap was the reaction of a real man who a woman had just told she aborted his baby. Compare that to the modern day cowardly male response, "It's your choice. Whatever you decide, I'll support you."

Jill? Jill? I, um, I mean I'm sure you're getting around to making a very good point I'm just not sure exactly how you...

"It was this fierce devotion to family that strangely endeared us to the Corleone men despite their otherwise heinous behavior. In fact, Mafiosos aside, the Italian culture has always evoked thoughts of large, loving families."

Oh. I see: domestic violence is aces. Of course. It all makes sense now.
Posted by my name is kate at 2:39 PM

*SLAP* Be a real man, Johnsy. At the very least go home and beat your wife...

And as long as I back it up with strong family values, it's okay, right?