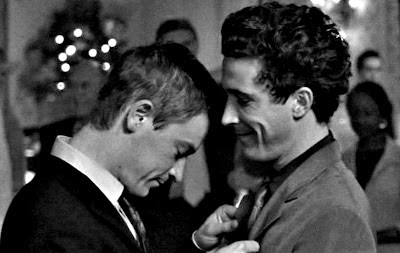 In the brilliantly awesome UK TV series Queer as Folk there's a wonderful scene where Vince, a charming Dr Who fan in love with his best friend Stuart, realises he'd rather continue to be lovesick and hang out with Stuart than stay in a relationship with his nice (read: boring), well-adjusted (boring), reliable (boring) boyfriend, who's so boring I've forgotten his name.

He has this epiphany and after ditching the boyfriend over the phone ("I'm breaking up... we're breaking up") says this:

Then runs off to find Stuart and, if I have the right scene in my head, the most amazing/fucking terrible dancing scene you've ever scene ensues. Seriously, if you haven't watched the series go and do so right now, although for fucks sake please don't bother with the US version. No. Just no no no no no.

Anyway, I was thinking about this tonight because I was reading this charming article by David Sedaris and I started trying to recall how I'd got into Sedaris, who is an absolute delight, in the first place. Then it came to me: I'd started reading him because the boy on whom I had a mad, utterly unrequited crush was reading him and in my stupidity I assumed that all I had to do to overcome his indifference was show him how much we had in common. "You like Me Talk Pretty One Day? I like Me Talk Pretty One Day - let's go to bed." The boy didn't work out but I got to keep Sedaris (literally, I actually still have his copy) and as it turns out I really DO love him.

Unrequited love gets kind of a bad rap but it's taken me this long to realise it's also a pretty good motivating force. When you desperately want something you can't have you have to try and think of ways to have it, whether that means completely remaking your personality, losing 10kgs or locking him in the basement until Stockholm Syndrome sets in.

In my short(ish) 29 years here's just a SPRINKLING, just a HINT of the things that I have done or achieved as the result of a big fat unrequited crush.

Belle and Sebastian: My favourite band in the world and the only walk-in on my Desert Island Discs. So it's a bit embarassing to admit I only threw myself into him because someone I adored asked me if I'd heard of them.

The Virgin Suicides: One of my favourite books and I seem to recall I only borrowed it from an *ahem* certain crush so I would have a reason to return it. Which I didn't (but, hey, he moved away, no jury in the land would convict me).

A shitty novel. This one is not so exciting but the first complete 'novel' I ever got around to finishing was 100 per cent inspired by trying to make someone fall in love with me. This particular, er, person, was so far out of my league intellectually that the only way to even the scales was to write an amazing first novel that would blow his mind. Unfortunately it was shit but, hey, I finished the fucker.

I learned how to drink. Sure in hindsight I realise the fact this boy and I almost only ever met at pubs and bars was a red flag to his (mild) problem drinking. At the time it seemed reasonable and I, until then not really that much of a drinker, learned the beauty of getting tipsy drunk for no reason. This one barely counts as unrequited love because we did end up going out for a time. But I like to think our best times came before I realised he liked me too. After that it was all downhill.

I could go on but if I even start to think about all the wonderful/terribly sad music unrequited love has driven me to I might never get to sleep.

UPDATE: So something went wrong the first time I tried to post this and... I don't even know. Should be fixed now.
Posted by my name is kate at 10:20 PM

I require an unrequited love. SUch as a real person, rather than people off the telly. SUggestions please.

I have no ideas why my "U" likes to be in capitals. Possibly cos I'm shit at typing.

I could help you but I think time has shown us that we have very different taste when it comes to the boys. I like 'em skinny - you appear to favour those capable of throwing you around like a rag doll, no?