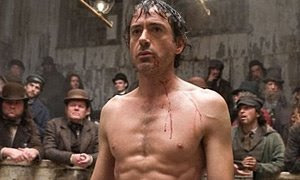 So normally I would be outraged. The very idea of having Sherlock Holmes dash about shirtless is, to my mind, an affrontery to the very IDEA of Holmes. Smacked out of his mind, yes. A kind of pain-in-the-arse know it all, sure. Possibly really sexist and totally racist? Hey, dem books are old. But shirtless? Come ON man.

This argument tends to break down, however, when you recall that the role of the great man in the latest movie adaptation is being played by an even greater man: Robert Downey Junior.

I had a request the other day from a regular reader to ask if I couldn’t try to indisperse my gooey boy-related posts with some ‘girls I’d turn for’ action. To be accompanied, of course, by some graphic photos. I said I’d give it some thought, and honestly I did. But, faced with a choice between staring into some minx’s faux cleavage or some shameless gushing about RDJ… well, my hands are tied.

The truth is that RDJ could, at this point, more or less take a giant crap – an ACTUAL crap – on any number of my favourite literary creations and I’d probably let it pass. Oh you’re going to play Maurice as a straight man are you? Oh well done, if anyone can pull it off you can. And um Gatsby is, er, black? Uh huh well, um… good luck with all that I guess. Should make a fascinating double feature with your take on The End of the Affair in which Henry is Weekend-at-Bernies-style dead. So, can I meet you in your trailer afterwards or what? Cheers, RDJ – you’re the best.
Posted by my name is kate at 3:57 PM

well, at least you tried. lols. I can take that kind of failure if RDJ is involved - at least he's not some random flash in the pan "hottie"

Oh yes he's here to stay. Can we just pop him in a wig and call it a compromise?

I do have to wonder if RDJ can pull off the amount of tweed required by the role.

A cocaine addict who is madly fanciable but totally not into you? It's the part RDJ was BORN to play...