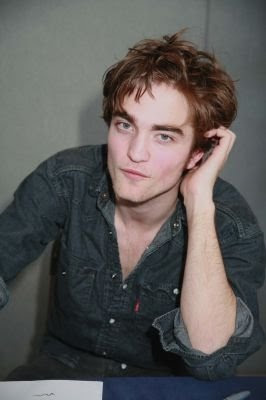 As I sat watching Twilight last night, surrounded (I assume) by sexually frustrated teens, it occurred to me that the success of the entire movie, by which I mean whether you love it or hated it, hung more or less on one thing: do you want to fuck Robert Pattinson?

Luckily for the movie of course you do. Me too.

Two hours spent looking at his face brood its way through some cheesily awesome dialogue filled me with the desire to bring the word “scrumptious” back into popular usage. His cheekbones should be giving other people’s cheekbones lessons on how to be cheekbones. Even his hair, which, in the movie is actually eleven feet high, started to look tasty to me if only because, I reasoned, if he could make THAT stand up all day… well, let’s just draw a curtain over that little suggestion. But seriously: the bit where he opened his shirt? Yeah if someone could tell me what happened in the ten or so minutes after that bit that would be great – I think I blacked out.

Sure Rob’s role (you mind if I call you Rob?) as Cedric Diggory in the Harry Potter franchise does leave the unsettling impression he’s only about 15 and you reeeeaally shouldn’t go there but in reality the boy is a strapping 22-year-old. Not only legal but moderately socially acceptable.

Walking out of the cinema the always insightful Andy described the concept thusly: “it’s like a girl had a wet dream and then made a movie about it”. For once he was incredibly right. And this wet dream is six foot one AND speaks with a British accent.
Posted by my name is kate at 8:46 AM

I think I blacked out too during the "sparkling" Edward(Robert) scene. I believe after watching Twilight I headed home for a cold shower as well. :}
I loved this, it made me laugh!

There are no better words that have ever been said to describe that is which Rob....He is perfectly beautiful....MMMMmmmmm....IloveRob...

In my hungarian blog there are more photos of Robert in Budapest. Please check it! :)