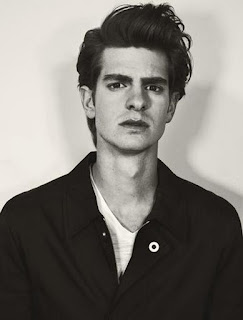 I received an interesting message from my friend Jayne the other day, reading simply: Is Andrew Garfield  in the Venn Diagram? I vote yes.

Jayne and I, you see, have very different taste in boys. She likes them fit and muscular enough to (I'm editorialising now) throw her around like a rag doll, should circumstances permit. I prefer them scruffy and skinny enough to disappear when they turn sideways. Still every now and again the stars align and the circles of our respective Venn diagrams overlap, most notably in the case of Swedish hottie Alexander Skarsgaard.

But... Andrew Garfield? This I hadn't expected. I'd noticed him, idly, in The Social Network and thought he was cute but other than being vaguely aware he was going out with the seems-so-charming Emma Stone I hadn't thought about him since.  Then blammo he wandered onscreen in The Amazing Spider Man and I was smitten. (Meanwhile let me point out that The Amazing Spider Man is not a great movie. I was coaxed in against my will and it was, you know, fine and perfectly okay but all that was good about that movie can be laid at the feet of Andrew Garfield who was, it must be said, too good for the material. )


Did you ever have that thing where you had a crush on someone and your friends just Did Not Get It. You'd be babbling on about his smile or what he'd said to you ("hey, you dropped your pen") and they'd be all "him, really?" That's Andrew Garfield. Looking at the photo of him I've put in above the thing is... I don't particularly fancy him. He's got good bone structure, sure, but his eyes are maybe on the small side, his nose is semi-goblinesque and his hair looks FUCKING INSANE.

But that is the secret of Andrew Garfield: he is greater than the sum of his parts. Walking and talking around onscreen he is adorable and charming, subtly sexy without trying to hard and simultaneously, I don't know... goofy? If I have an achilles heel when it comes to boys it's all about the smile. I am a sucker for a killer grin and Andrew Garfield has one of the best smiles I've seen in quite the long time. (As an aside why am I still referring to him by his full name instead of just Andrew or Garfield? Andrew Garfield, Andrew Garfield, Andrew Garfield, somebody stop me).

The only time when my lust faltered during the movie's 136 minutes (seriously, Hollywood, action movies should not be longer than 2 hours and this trend is getting fucking insane please stop, I could have cut half an hour out of this movie with my eyes closed) was when Andrew Garfield (I can't stop now) took off his shirt to reveal he was, in fact, quite insanely buff. Put it back on, I hissed in my mind and, to my delight, he eventually obliged. Somewhere in another cinema, on another day and in another part of town I like to imagine Jayne was begging him to take it back off.

All of which is a very long-winded way of saying that Andrew Garfield is a pretty decent actor, a certified Kate-approved hottie and most definitely belongs smack back in the centre of the Kate and Jayne Venn Diagram of Lust.
Posted by my name is kate at 11:00 PM